We had our first snow yesterday and my boys were so excited! Of course we played in the snow, but the snow was so fluffy that we could not make a snowman or snow balls. Since we live in the Midwest, I am SURE we will have plenty of chances to do that this winter. 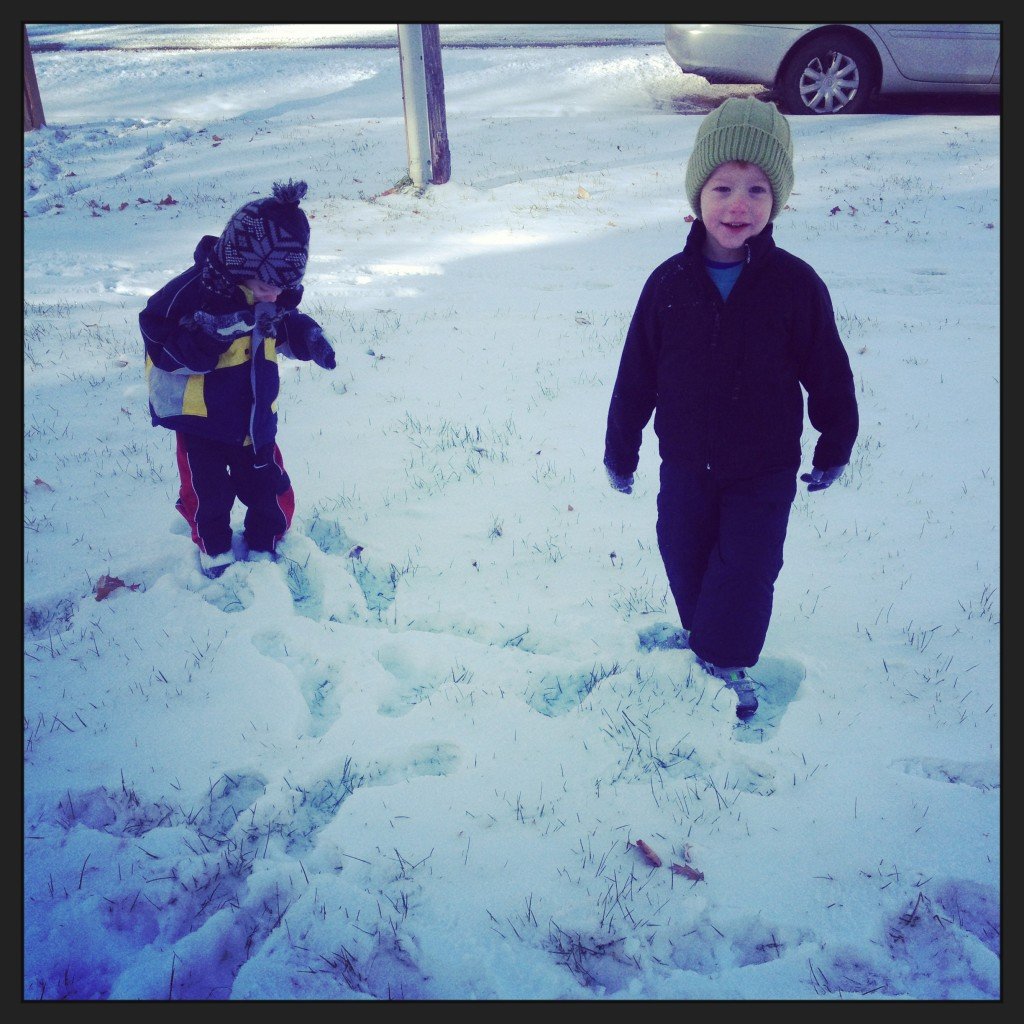 Since I knew the snow probably wouldnt last, we decided to do some experimenting with the snow. Troy has been very interested in snow and has lots of questions, so I thought we would investigate snow. To set up, I just took snow and put them in bowls. Then we found 4 ingredients from the pantry to add to the snow. We wanted to  know what would happen to the snow if we added something to it. 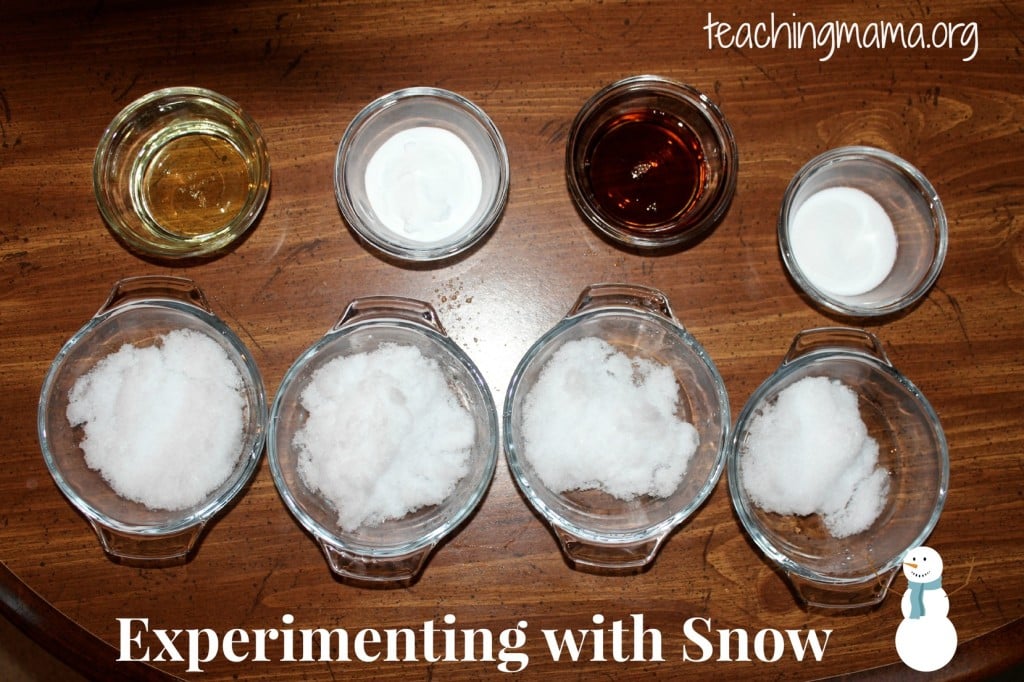 So for the experimenting, we used vegetable oil, baking soda, pancake syrup, and salt. My preschooler poured it into the bowls of snow and we observed what happened. 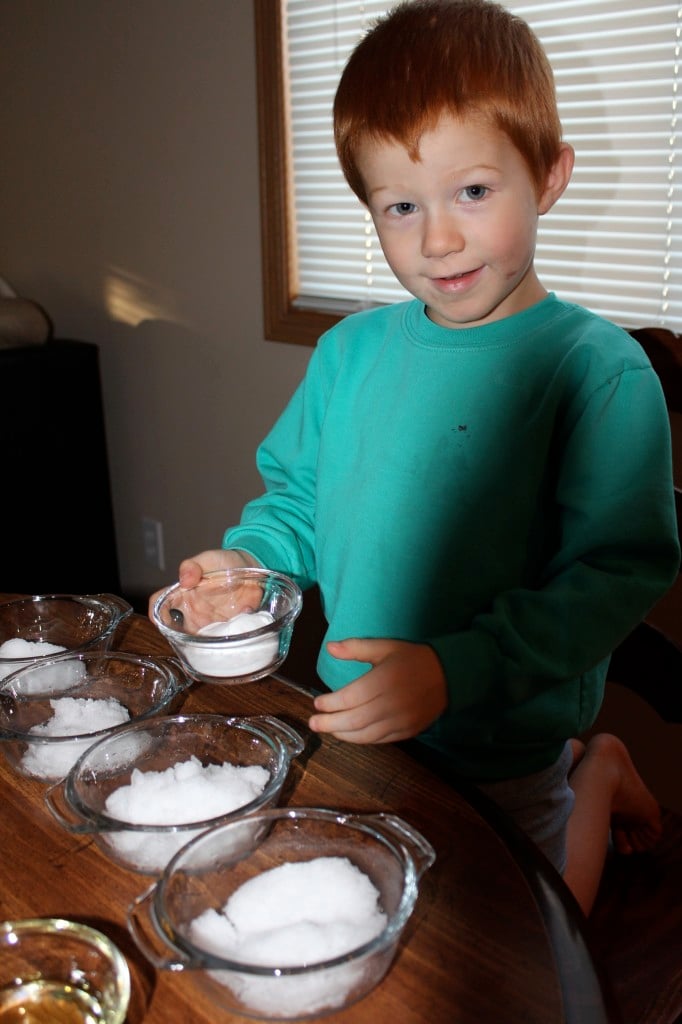 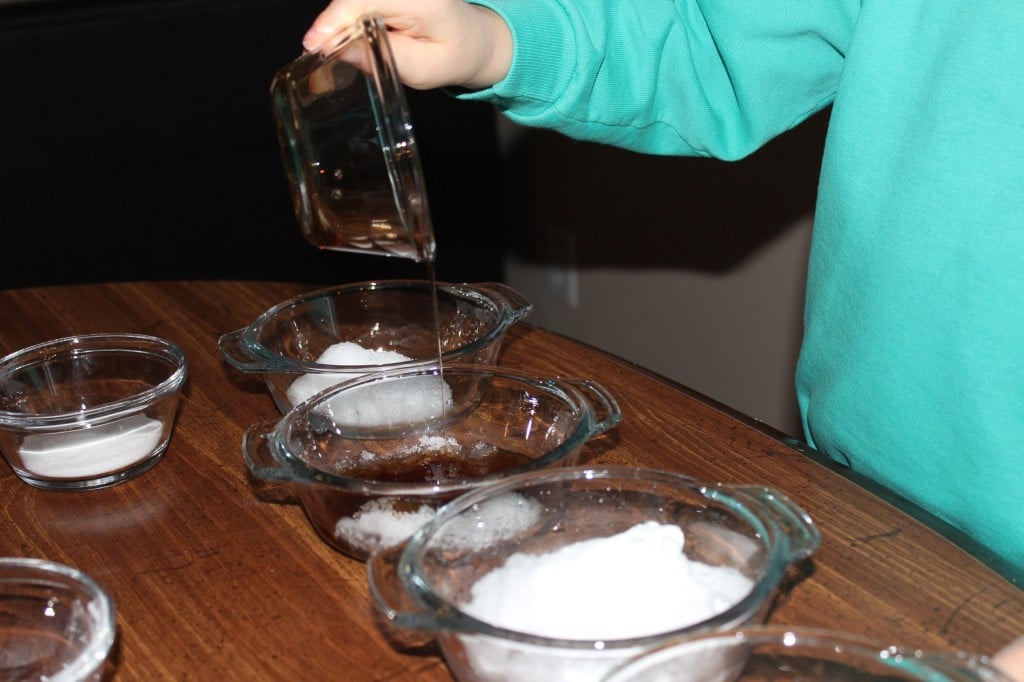 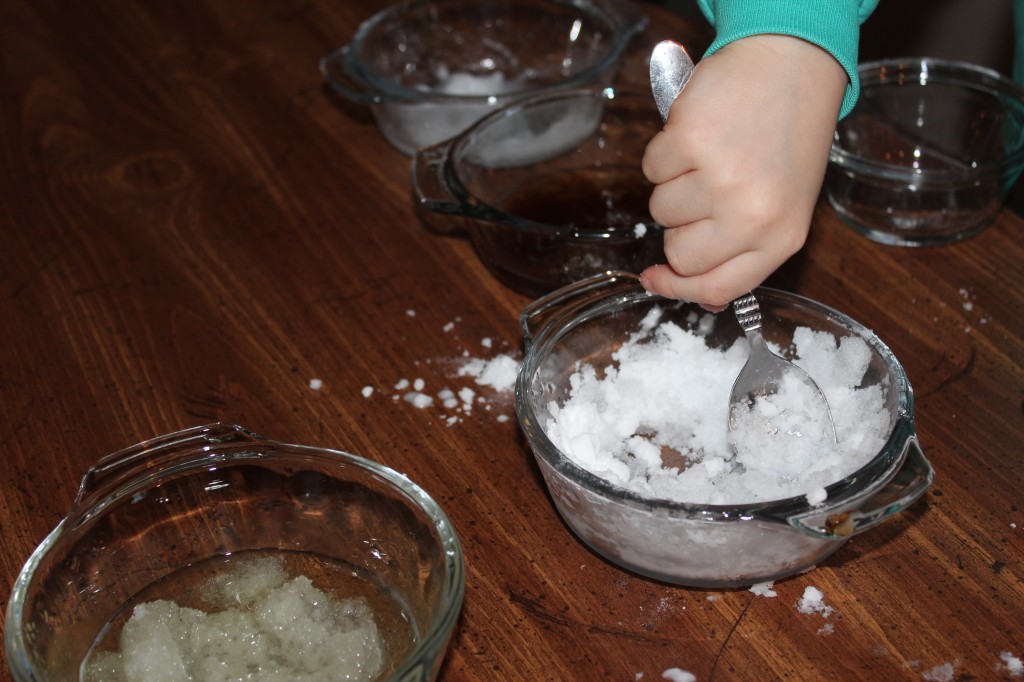 What we saw was that the syrup and oil made the snow melt right away. The salt sat on top and when Troy stirred it, it melted very fast. The baking soda took a lot longer to melt. You could try this activity out using any materials you have in the house. Of course not everyone can do this activity, but if you are lucky enough to get snow, then you can try it out! 🙂

Then I gave Troy time to just be creative. He used his imagination to make up his own experiments. 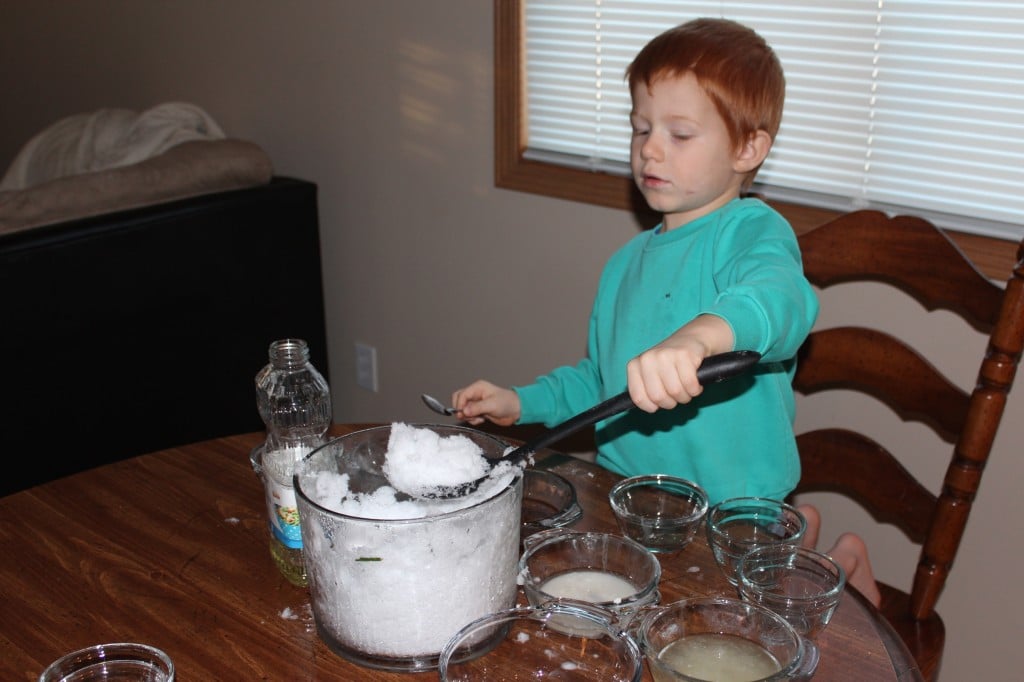 Lastly, we talked about how water and oil don’t mix well and that they like to stay separated. We were curious to know what would happen over time if we mixed snow with the oil.  So we added oil to a container of snow and watched what happened… 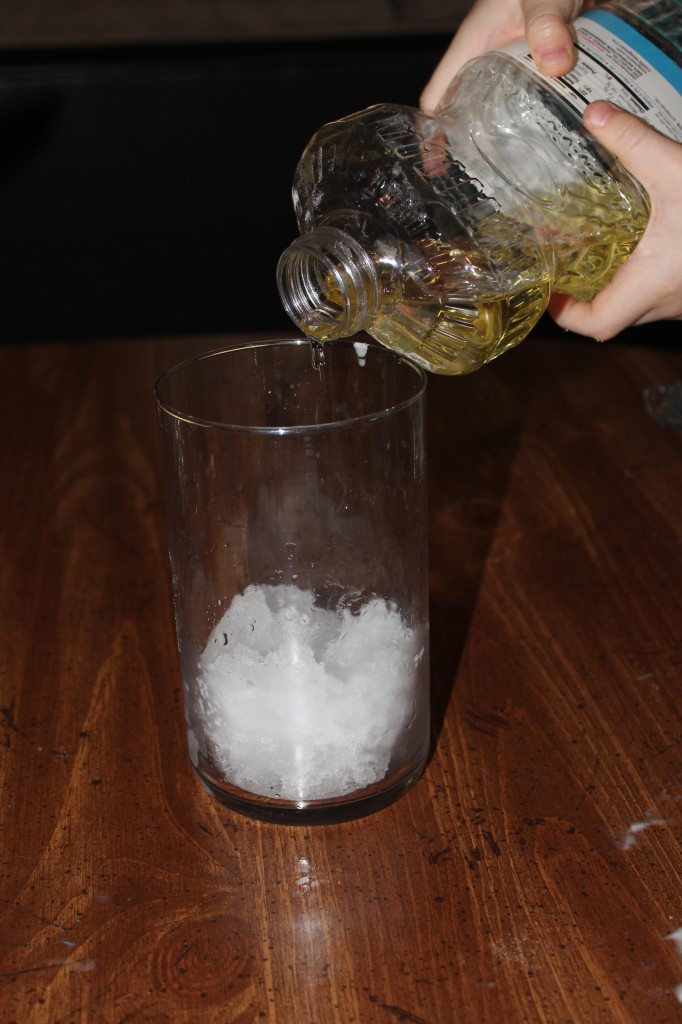 At first, it was an icy mixture. Then an hour later, it started to separate. Another hour later the snow had melted and the oil and water were completely separated. Troy was so surprised! 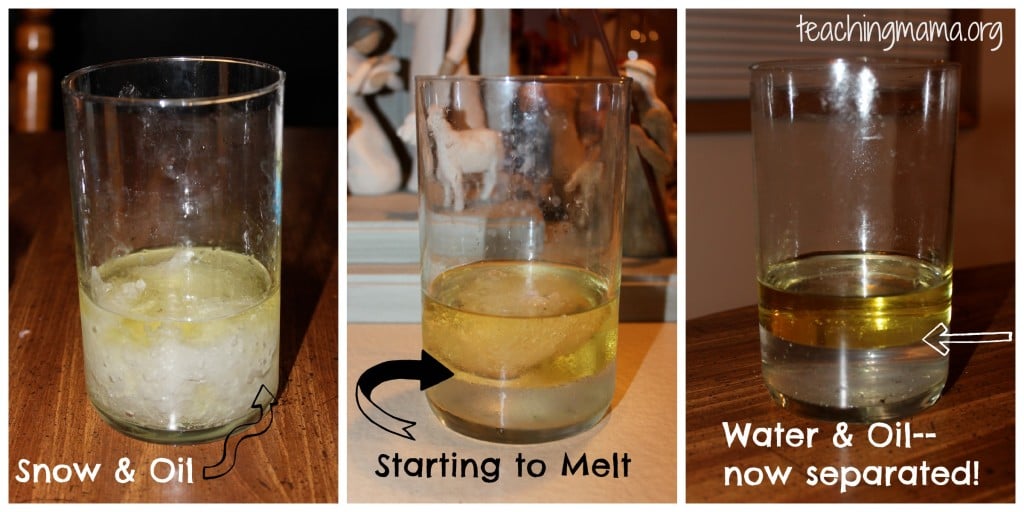 This was a fun, yet simple science experiment. We did a lot of observing and trying out experiments, which real scientists do!

If you are eager for more science experiments, then you should check out my co-hosts blogs for Science Saturday!

Sarah at Little Bins for Little Hands is doing and experiment on Solids, Liquids and Gasses.

Emma at P is for Preschooler is exploring items that dissolve.