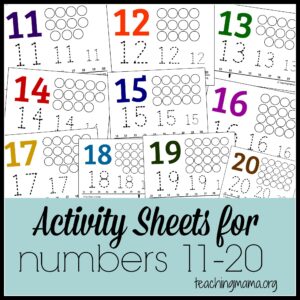 The numbers 11- 20 are tricky for kids to learn. In fact, my kids have both thought there was a number called "eleventeen"! I've had several requests to share some activities for numbers 11 through 20, so today I'm sharing a couple! First up is the Number Spin. I created this from a toilet paper roll. I painted it orange with acrylc paint. Then I took a a piece of card stock paper and wrote the numbers 0-9 on it. I also drew lines in between the numbers (which you'll see below.).  After the … END_OF_DOCUMENT_TOKEN_TO_BE_REPLACED 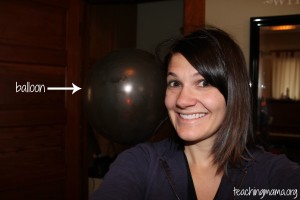 We were playing with balloons the other day and I thought we'd try an activity out I saw on Pinterest. I took balloons and numbered them 1-10 with a Sharpie. Then I hid them around the house when Troy was taking his nap When he woke up, I explained to him that he needed to find 10 balloons with numbers on them. The only rule was that he had to start with #1 and had to find the balloons in order. For example, if he found #8, he had to leave it there until he was ready to find that … END_OF_DOCUMENT_TOKEN_TO_BE_REPLACED